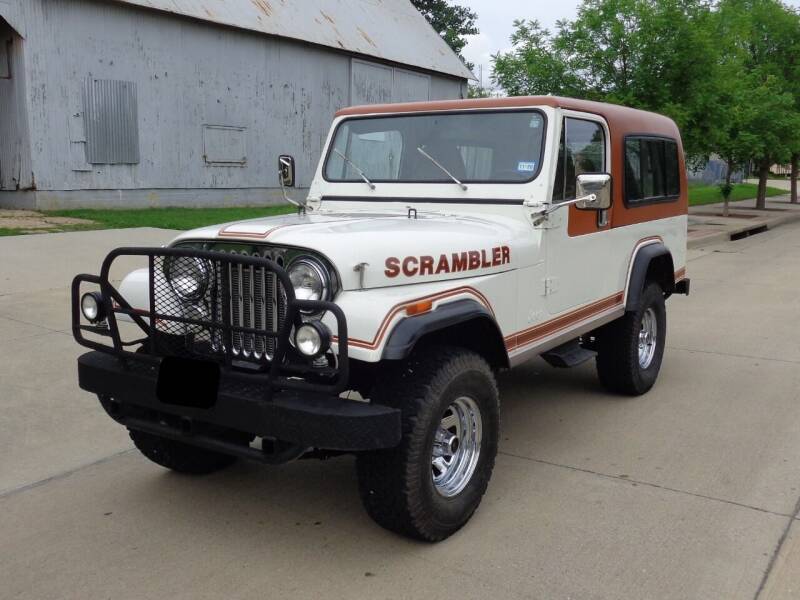 Ready for a test drive?
Let us know what works for you.
Have additional questions?
Give us a call and we'd be happy to help!

Arguably the most recognized vehicle ever produced, universally adored and not just by off-roaders and car enthusiasts, but by old war veterans, cowboys, teeny-boppers, rednecks, yuppies, country girls, hunters, co-eds, little kids and most dogs. The Jeep is rugged, cute, serious, fun, classic and eternal. Jeep is not just a brand, its a whole category; a lifestyle. Of course this particular Jeep also resonates with a group of special Texans... the ones who like to say "hook'em horns!" The CJ series dates back to the Jeep's beginning, when the US government commissioned US manufacturers to design and produce a simple and rugged vehicle that could be easily deployed to the field of battle. That was in 1944 and the CJ1, also known as the Willys was the result. Over the decades the CJ took root in the consumer market and steadily improved in every respect. Fast forward to 1981 and the long wheelbase CJ8 bookends the era. It was the most versatile platform ever offered in the Jeep and because of that long wheelbase offered a more civilized roadgoing manner. The Scrambler, like the one offered here was the top of the line. This Scrambler was restored to the previous owner's preference for a full top, back seat and ranch bumpers. The truck was fully overhauled mechanically and runs perfect. It is equipped with the bullet proof 4.2 liter straight six upgraded with the OEM fuel injection system offered in later models. Additional features include a 4-speed manual transmission, hi/lo transfer case with locking front hubs, power steering, power brakes (front disc) and cold AC . Scramblers were adorned with deluxe interior features including a tachometer and clock. The original unrestored half top with partition and soft top bows are included in the sale as are the original front and rear bumpers and a tow bar. This Jeep has some desirable modifications but without losing the iconic original appearance. The interior floor, roll bar, inside tailgate, ranch bumpers and side steps have all been treated with a heavy dose of rugged Rhino Coat. A mild lift and oversized all terrain tires are fitted. Most Scramblers were configured as pickup trucks with no back seat which is cool, but with the hardtop's locking liftgate your options expand... like having a tailgate party before the Longhorn game and still being able to lock things up while cheering for the team inside the stadium. Scramblers have long been coveted by collectors and for good reason. Solid, rust free examples like this one are not easy to come by. Finding one that is offered with all three of its top variations makes this a truly rare find. This CJ8 is located in Rowlett, Texas and is offered as is where is. Clean Texas Title. Low ballers, scammers and sales assistants need not apply. If the ad is up it is available. No trades, no financing. Call, text or reply.