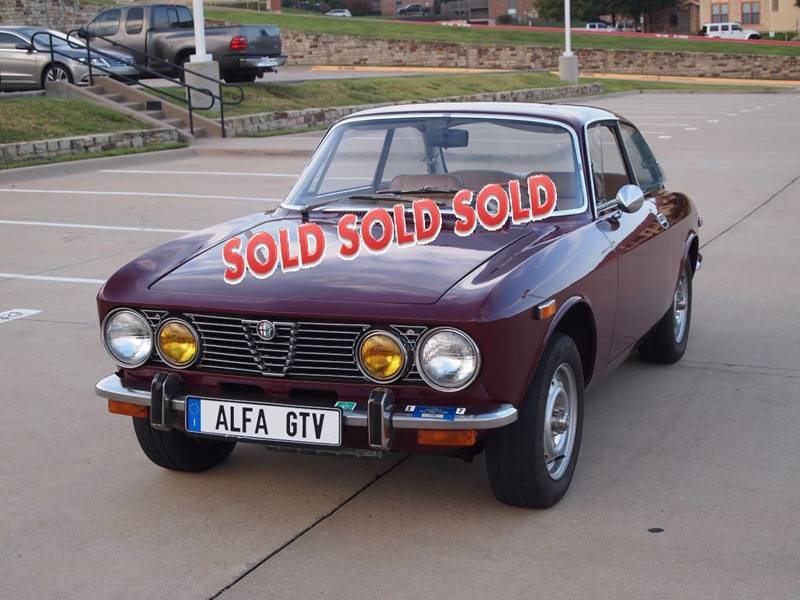 Ready for a test drive?
Let us know what works for you.
Have additional questions?
Give us a call and we'd be happy to help!

Reluctantly selling this Italian masterpiece of an automobile; the 1973 Alfa Romeo GTV 2000. This is a documented ONE OWNER car with 76,500 original miles. Finished in Rosso Amaranto (maroon) and Cuoio Naturale (beige). Just looking at this little car can turn machismo into marshmallow. It is unquestionably one of the most beautiful and perfectly proportioned car designs of all time. It epitomizes the concept of simple elegance. Capisce ? Penned by the young Giorgetto Giugiaro for Bertone, these 105 series coupes are not just a pretty face. From their introduction in 1963 these cars came equipped with a high revving double overhead cam light alloy four cylinder engine, four wheel disk brakes and a five speed transmission. It endured largely unchanged on the streets and race circuits around the world for 14 glorious years, and it endures today in the hearts and loins of car enthusiasts everywhere. Bellisimo! The provenance of this car is simple, one owner. It was purchased by a medical student while interning in a Chicago hospital. He bought it for his young bride from Laurel Motors of Westmont, Illinois before relocating to Georgia where she drove it daily for many years raising a family. As he prospered the car was used less and less. In 2007 it underwent an extensive mechanical restoration and respray in the original color. Starting with a solid, no accident rust free car, the original transmission, clutch, brakes and suspension were completely overhauled using original parts where possible and new where necessary. The original motor received a top end refresh and the original SPICA (SocietÃ Pompe Iniezione Cassani & Affini) mechanical fuel injection was professionally rebuilt. Since then the car has seen less than 2000 miles added. Still in its unmodified mostly base trim this car has all original sheet metal, glass and steel wheels. The only options being limited slip differential and radio delete. The unusual Plum color is striking, but upon the most critical inspection shows some checking here and there. The original seats were dyed, they have great support but much of the pleats have lost their thread. The door panels and carpet have been replaced. The steering wheel, headliner, dash and the rest of the interior is original. The dash does have a few cracks. The only issue with this car is the passenger door stay is broken. Everything works as it should, that is once you figure out what the odd assortment of seemingly randomly placed control knobs, levers and toggle switches are for. The business side of things in hand and under foot seem, well Italian. Unlike a BMW 2002 whose controls seem to be precisely where you expect them, the little Alfa prefers to have it the other way around. But once you settle into her way of thinking you'll never look back. Who needs bratwurst and sauerkraut when you can have the arrabiata diavlo? The 2.0 liter aluminum twin cam 4 cylinder pulls strong and makes nice sounds. The gear box and clutch shift smoothly with no 2nd gear issues. The car rolls perfectly straight down the road without drama at 80mph. Brakes modulate well without fade. The driving dynamics of this car is amazing. It integrates you into the mechanism; translating the vibrations and sounds into sensory feedback and control. It's not about finesse or brute force. It's about the car inviting the driver to complete the connection between its 130hp aria and 2200 pounds of balletic curb weight. It truly delivers that visceral sensation, the nirvana car guys talk about but seldom experience. Just writing about this car, searching for the words, I notice my breaths are short and my blood feels hotter; my mind races between the thought of driving it and the thought of just looking at it. My God, it feels like I'm cheating on my wife! Now you have the rare opportunity to experience the passion and the emotion I am trying to convey here first hand. It goes without saying that these cars are becom